Music Review: With a Twist - Deluxe Edition by Straight No Chaser 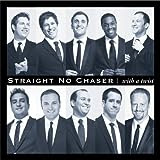 Pros: Great a cappella versions of classic songs
Cons: Duplication if you already have the original version
The Bottom Line:
More of a great thing
Gives you much more to enjoy
Worthy double dip


No, I Did Not Need the Deluxe Edition.  But I'm Thrilled to Have It

A few months ago, I was doing a search for the a cappella group Straight No Chaser and discovered they had put out a deluxe edition of their CD With A Twist.  Since I have and love the disc, I knew I did not need to get it.  But I wanted it.  And some good friends got it for me for Christmas.  I am thrilled.

This is now a two disc set.  Disc one is the CD, and the first 12 tracks are the same 12 tracks as the original release.

These 12 tracks alone are great.  The disc opens with "I'm Yours," a bright and sunny mid-tempo song about the joys of love.  They couple it briefly with "Somewhere Over the Rainbow," and it's a great addition.

My favorite track comes next.  "Tainted Love" is a fast take on the classic.  Since there are 10 guys in the group, they are able to cover back up singers, and percussion with no problem.  It makes for a fun, dramatic version on the song.  This is a track I can listen to over and over again.

Another fun song is their cover of Queen's song "You're My Best Friend."  While I like the celebration of friendship, one thing that makes this one stand out to me is that all 10 guys take at least one line as a solo.  Most of the time, the solos go to three or four of the guys, so this is a nice change.

Yes, there are slower moments here as well, like "Fix You."  They get serious with the power "The Living Years."  And Barry Manilow joins them for a cover of his song "One Voice."

For this release, they have added studio versions of four new songs, or at least new to me songs.  "How Deep is Your Love" is their take on the Bee Gee's classic, and it's fun.  They speed things up for "Time of the Season," which may just become a second favorite on the disc.  The arrangement uses some snapping as well as vocal percussion and a few recording tricks to make another fun arrangement.  The biggest surprise to me is "Till There was You."  Yes, we are talking about the song from The Music Man.  They'd sped it up, so it's no longer a slow ballad but a mid-tempo love song.  It took me a couple of listens to get it, but now I really like this take on the song.  The final of the new tracks is "Only You."  Yeah, not exactly helpful from the title, is it?  (Heck, I know a praise chorus by that name.)  In this case, it's the song originally recorded by .  Again, a love song, it's a slower way to end the disc, and I like it.

So that covers disc one.  What's on disc two?  I'm glad you asked.  It's a concert DVD recorded inNew Yorkin 2009.  The concert was available as the stand alone DVD "Live in New York", but that DVD is out of print and apparently very much sought after and expensive.  It's much cheaper to get it here.

Yes, a few of the songs cross over between discs, like "I'm Yours" and "How Deep is Your Love," but there is plenty more new material.  They've got some very fun songs in their hour concert like "The Lion Sleeps Tonight" and "Stand by Me."  I was especially interested to hear their serious take on "" since that song closes out their hilarious "Twelve Days of Christmas" that made them famous.  Speaking of which, that song is no where to be found here, not even as an Easter Egg.  I would have loved to see it, even the original recording would be fun.

While the songs in the concert are great, if you are looking for much from the guys between songs, you'll be disappointed.  Mostly, you get them introducing the next song by title and original artist.  Occasionally, they throw in a little very limited choreography, and that's always fun.  It was a small venue, and thanks to the camera work, we get to see the guys up close, probably better than I'd ever be able to afford in a real concert (although I'd love to see them in person).  Still, a little bit of shenanigans between songs would have been fun.  And I've got a few new songs I need to find their recordings of.

The concert ends with what I think is the only original song on either disc - "Straight No Chaser."  This song really gives the feeling that these guys are friends and enjoy what they are doing.

What I found most interesting about this DVD is that they went with stereo sound and not full surround.  It's a concert; they're all on stage; you really don't need it.  But I thought surround sound was pretty standard these days.  The sound is very good over my system, however, and the picture looks sharp.

If you haven't bought With a Twist yet, I highly recommend getting the Deluxe Edition.  The extra content is worth the extra price.  Do you need to upgrade your regular copy?  That's a harder call, although I find the extra content fun and worth having.

Email ThisBlogThis!Share to TwitterShare to FacebookShare to Pinterest
Labels: music