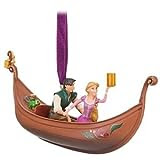 Pros: Fun ornaments taken from a great movie scene
Cons: The faces, especially Rapunzel
The Bottom Line:
Faces aren't that great
But the moment captured is
Overall, it's good


I Almost Did Not Get This Ornament.  But then I Saw the Light.

Yes, I did buy one Rapunzel ornament before I saw Disney's movie Tangled last year, but I decided to hold off on getting any more until after I saw the movie.  And then, I debated a bit too long on this ornament The Disney Story released featuring Rapunzel and leading man Flynn Rider.  But I decided I had to have it and I tracked it down.

The ornament features the duo at the big romantic moment in the movie.  They are in a boat about the see the light celebration that happens every year for the princess (Rapunzel, not that she knows it yet).  Thousands of paper lanterns are released in a sign that the kingdom has not forgotten the young girl who was kidnapped as a baby.

Rapunzel is sitting in the front of the boat.  In her left hand, she has one of the paper lanterns and is about to release it in the air.  Her right hand is resting on Flynn's hand, which is on his knee.  He's sitting in the back seat looking at Rapunzel.  And in the back of the boat, Pascal, Rapunzel's pet chameleon, is watching the entire thing.  The sides of the boat have flowers painted on them.

I loved that scene in the movie.  I really bought the romance between these characters in the story, and this scene really cemented it for me.  When I realized that Rapunzel actually had a lantern in her hand was the moment I knew I had to get it.  It really captures everything happening in that scene (and there is a lot) so perfectly.

However, I do have a complaint.  The faces on the characters are rather small, so it's hard to tell for sure who they are.  Flynn fairs okay and he mostly looks like himself.  Poor Rapunzel, however, really looks like a generic young woman and not much like the character in the movie at all.

This ornament is designed to be hung.  I saw that because the keel goes under the boat and forms a ridge that makes the ornament lean to one side or the other if you set it down.

The ornament comes with a burgundy cord to hang it on the tree.  It's a pretty color that compliments the dress Rapunzel is wearing.  Because the cord connects to Flynn's back, the boat tips forward a little bit.  By the time you have it in your tree, it's not that noticeable, however.

I'm glad I gave this ornament a second look.  While the characters could be better, it captures a great scene between Rapunzel and Flynn.
Posted by Mark Baker at 12:07 PM