Music Review: All About Love by Steven Curtis Chapman 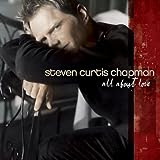 Pros: Some fun songs celebrating the love between SCC and his wife
Cons: Theme gets repetitive, not much for singles
The Bottom Line:
"It's all about love"
But that gets repetitive
So it's not his best


Steven Loves Marybeth.  Let Him Sing About it for You

Steven Curtis Chapman has written and recorded many love songs for his wife over the years.  He devoted all of All About Love to those songs, but this isn’t a collection of greatest hits.  Instead, it’s mostly new material that celebrates romance.

Two of the songs are about more generic love.  “All About Love” starts us off with an upbeat pop/rocker that talks about the importance of love in our lives.  Near the end of the disc is “Moment Made for Worshipping,” which reminds us that ordinary acts of love are acts of worshipping God.  This song feels shoe horned into the disc and could easily have fit on any of Steven’s releases.

Steven wrote most of the rest of the songs and he or Marybeth commented on each song in the notes, so you really do get a picture of the love in their marriage.  For example, they freely admit they are opposites, which is the subject of “Your Side of the World” and “We Belong Together (Tarzan and Jane).”  Steven gets a bit whimsical with “11-6-64,” which celebrates his wife’s birthday.  “You’ve Got Me” is a song of commitment while “Echoes of Eden” picture marital happiness as a glimpse of the true joy of Heaven and “We Will Dance” looks at their marriage as the constant in a changing world.

Stylistically, this disc fits with Steven’s standard guitar based pop/rock style.  The upbeat tracks and slower ballads are pretty evenly balanced and provide enough difference to keep my ear musically.  It helps that a few songs focus on piano.

There are four non-original songs.  The strangest of which is “When Love Takes You In.”  This song about adoption doesn’t really seem to fit and is the exact same track from Declaration, which was Steven’s most recent release at the time.  Not surprisingly, Steven covers his wedding classic “I Will be Here,” trading guitar for piano and upping the strings.  While the original is a classic, this version is beautiful, too.

Steven covers two songs by other artists that are special to him and Marybeth.  Up first is the Proclaimers’ “I’m Gonna Be (500 Miles).”  While his version isn’t quite the hard rock of the original, it’s still the rockiest track here.  Then there’s the 80’s jazz of “I’ll Take Care of You,” recorded first by Ronnie Milsap.

I’m a huge Steven fan, but I find myself torn on this disc.  Maybe it’s because I’m single, but I don’t connect to these songs.  I appreciate the honesty and his commitment to his marriage, but I rarely pull this one out to listen to.

Couple that with the fact that there are 16 tracks in total here.  While I appreciate getting over an hour of music, the subject becomes repetitive lyrically no matter how much musical variety is present.

If you are looking for some love songs from a Christian point of view, All About Love is for you.  Otherwise, you probably won’t listen to it much.
Posted by Mark Baker at 3:35 PM