Music Review: The Basic of LIfe by 4Him 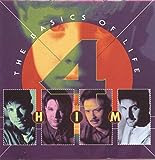 Pros: Fun songs with good music...
Cons: ...that sound dated and similar
The Bottom Line:
Despite dated sound
And songs that sound similar
I really love it


The Disc I Always Associate with 4Him

When I really started getting into music and listening to the radio in high school, one group that quickly grabbed by ear was 4Him.  This male quartet filled their pop/rock songs with harmonies, although I was mainly drawn to the fun style of their music.  The first CD of theirs I bought was their 1992 release, The Basics of Life.  It was only their third disc, but it's still the one I immediately think of when I think of them.

Now the first thing you should probably know about this disc is that it may have been released in 1992, but it's hard to tell at times.  There is less reliance on synthesizers and drum machines, but you'll still hear plenty of that.  It's amazing how I can tune it out; most of the time I don't even notice.  But when I start to listen for it, I do hear it.

While this disc is the first to flash into my mind when I think about 4Him, there is a good reason for it (beside it being the first disc of theirs I bought.)  "The Basics of Life" is probably their most recognized single.  The title track is a mid-tempo anthem that encourages us to return to faith, hope, and love and stop letting the world intrude on what really matters in life.  While you might think it's about materialism, it actually is talking more about moral living and philosophy distracting us from God.  They tried to duplicate their success here many more times, but none ever quite took off like this one did.

The old 80's production are more evident in the next track.  "When It Comes to Livin'" actually talks a bit more about getting caught up in the world around us instead of standing for God.

"Fountain of Youth" has to be one of the stranger songs in 4Him's musical resume.  The first verse talks about Ponce de Leon's search for the mythical fountain.  But then it switches to our eternal life in Heaven.  Thinking about this one as an adult, I'm sure it doesn't work.  But the high schooler trapped inside of me enjoys the catchy beat even if it is done by drum machines with music by synthesizers.

"This Time," on the other hand, really speaks to me to this day.  It's a bit slower than the other tracks have been, but it is a cry to God for passion to come back into our lives.  Even 20 years later, it gets me.

Another favorite is "Built on Amazing Grace."  After an a cappella intro of the first verse of the famous hymn, the guys sing about the legacy they have from their Godly parents.  It's an ode to loving, Christian families.  Since I was fortunate enough to be raised in one myself, I identify with it.  This also has one of the better harmonies in it.  Sadly, the strings can't completely drown out the synthesizer that makes up the base of the song.  As an added bonus, three of the four dads in the group helped them record this song.

The most rocking song on the disc is "Freedom."  The heavy drums and electric guitar make it stand out as the guys sing about how trapped we can be by the Earthly things we expect will save us.

There are two tracks I actually associate with each other.  "Livin' in the Lions Mouth" is a prayer of commitment to live for God so that others can see their faith.  They use lots of circus imagery in this one, but the mid-tempo doesn't give into the cheap production values the imagery suggests.  I always associate it with "Wrecking Ball," a prayer to be used to break down the walls that people use to hide behind or divide them from others.  To me, they seem like a pair because if you are going to truly show your faith, you are going to wind up taking down some walls.

The disc ends with a guitar picked ballad.  "The Voice of God" is about the simple things around us that remind us of God's presence - things like a bird singing, a newborn baby crying, or thunder.  The simple guitar throughout really shows off the harmonies here.

The adult music reviewer in me notices that most of the songs sound similar.  With few exceptions, they are mid-tempo and heavier on the synthesizer than I remembered.  However, that high schooler in me I mentioned earlier doesn't care a bit.  Any time these songs come on, I smile and sing along without missing a word.  Both of us do agree that there are some good lyrics here, although the adult sees some of them as shallower than he'd like to remember.

Ultimately, the flaws don't matter for me.  The Basics of Life has been part of my music library for some long that I absolutely love it.  It's probably not the best disc that 4Him ever released, however.  Even so, there are still songs here that are worth hearing.